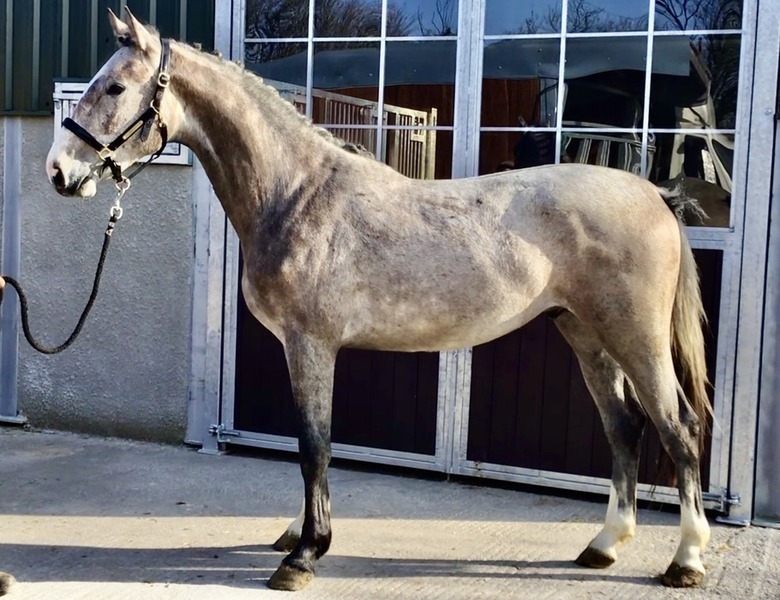 To make 16.2hh approx this 3yo grey colt is a super smart type with a pedigree to match ...

his sire Grandorado is my absolute favourite ...

All eyes are on Grandorado, one of the most exciting prospects of his age group. This tall, large-framed stallion offers size, scope, technique and trainability in spades and is already proving successful in sport.

Performance - Grandorado won his KWPN performance test, and then went on to win the finals of the KWPN Stallion Competition in both 2016 and 2017. As a seven-year-old, Grandorado was reserve World Champion in the finals at Lanaken, and is now successfully campaigning at 1.40m level under Willem Greve, winning the Neumünster Youngster Cup in early 2019.

Sire - His grand-prix winning sire Eldorado has a pedigree filled with some of the greatest stallions in modern history, with Clinton, Heartbreaker, and Landgraf all among his ancestors. Eldorado's sire, dam and both grandsires jumped at international grand prix, a rare and desirable accolade for a breeding stallion. Eldorado won the Roosendaal and Arnhem grands prix, was second in the 1.50m class at St. Lo, and sixth in the Hickstead Bunn Leisure Trophy and in the Pezinok World Cup qualifier. In 2011 he was second in the VION Cup in Ermelo.

grandorado is now winning at Grand Prix level and is a serious serious horse..

this guys dam line is very exciting too..

and this guys own siblings are:

this guy is green from the farm and a true raw diamond ....