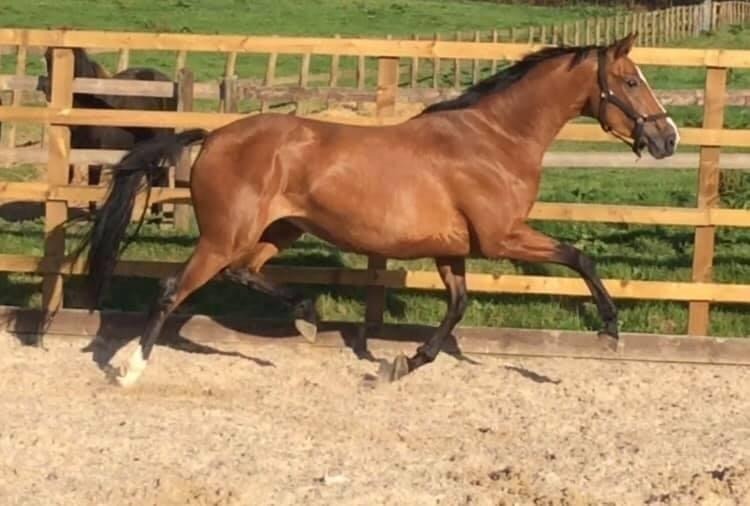 16hh 4yo mare.... she is currently being broken, this is a mare we are very excited about.

Spielberg is a dressage stallion to dream of. His conformation is almost ideal and he is a true ‘Strahlemann’. Thanks to his great movements, he obtained as only one of the few Westphalian stallions the title ‘Prämie’ stallion.

Sire Sunny Boy is an acclaimed son of Sandro Hit out of the Donnerhall-daughter Fantastica – the full sister of the legendary Don Schufro and Don Primero. Spielberg’s grandsire Rosier brings in the precious genes of Rubinstein I, who was bred out of the famous damline of Olympic champions Ahlerich, Rembrandt and Amon.

Through dam Rosiera, Spielberg goes back to Rondula, who is also the granddam of the Grand Prix dressage horse Last Minute, ridden by Ilka-Kerstin Geiss.

Besides a great size, Spielberg adds a fantastic mind to today’s breeding of dressage horses. Thereby Spielberg has a lot of rhythm and balance in his movements.

Spielberg was succesful in higher level dressage under the Dutch rider Joyce Lenaerts.

her damline is highly decorated, her “ster” graded dam has just started in sport after breeding this mare..

her grand mother is “elite” graded and is a dam line full of celebrated dams , performance horses and also the licensed stallion and 140cm jumper “amethist “ .

there is also lots of blood in this mares pedigree making her a very exciting event prospect as much as a jumper or dressage horse. She is really capable of a very exciting career in any spe here !