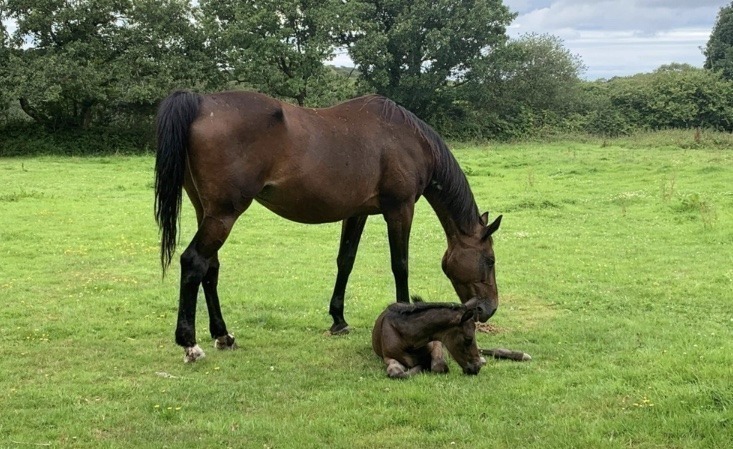 she is one I’m immensely excited about as she is from a direct darco x Jalisco b dam, two stallions who between them have been responsible for a huge part of modern breeding.

this fillies young sire is a future star, of this we are sure and for that reason he was an easy choice to partner this mare....

- Opium van de Moerhoeve is a prospect which many are looking forward to seeing, with it's outstanding bloodlines it is a stallion which has caused much interest having inhereted the ability, quick reflexes, and positive attitude there is no questioning why breeders are getting excited. Having the sire Kannan who has offpsring competing at highest level and numerous licensed sons and a dam who jumped internationally.

Performance - In 2019 Opium competed in the World Championships in Lanaken and individually ranked with a respectable 4th place. Following this success he has made multiple appearances in 1.20m showjumping classes and is performing well.

Sire- With the sire Kannan who has produced over 200 international show jumping horses, including the Olympic Champion Nino des Buissonets and Hickstead Derby winner Adventure de Kannan, and has been placed in the top group of the world WBFSH ranking for years; in 2016, he lies in fifth for jumping and tenth for eventing; an exceptional feat as no other stallion appears in the rankings for more than one discipline. He is the sire of CCI4* event horses Billy Beware, who has won six international classes and finished sixth at Badminton 2014, his first CCI4*, and Ogustin du Terroir, who was second in the Vairano Nations Cup and fourth in the under-25 CCI3* at Bramham.

Damline- Ischgl de Muze is a mare who has competed internationally up to 1.30m and is the dam to Mumbai who is a licensed stallion competing very successfully internationally at 1.50m. His damsire Nabab de Reve was awarded WBFSH No.14 having jumped at some of the highest level and is seen as one of the best European stallions due to his offspring being top sport winners and approved stallions. He was awarded 2002 Belgium Horse of the Year and also helped win Bronze at the World Games in Jerez de laFontera.