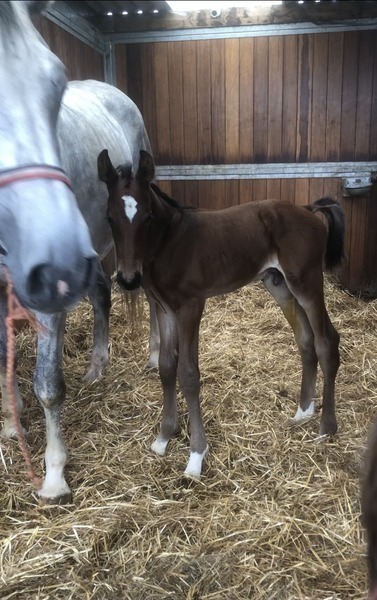 born 7/6/21 a super colt foal. His sire Opium JW van de Moerhoeve is of the jumping sensations of the year. His jumping ability combined with his incredible bloodlines make him a very suitable stallion for international breeding. His carefulness and quick reflexes are combined with a lot of scope and a super mind.

Sire Kannan is for many years already one of the best producers of international grand prix horses such as Nino des Buissonnets (Steve Guerdat), Molly Malone V (Bertram Allen), Quabri de l’Isle (Pedro Veniss), Tokyo (Christian Ahlmann), Quorida de Treho (Romain Duguet) and many others. In the pedigree of Opium there are many performance sires with stallions like Nabab de Rêve, Chin Chin and Quidam de Revel. His dam Ischgl de Muze jumped at international level with Joe Clee and she not only produced Opium JW van de Moerhoeve but also the approved stallion Mumbai van de Moerhoeve. Opiums grand dam is very famous in Holland. She is the mare VDL Groep Eureka and with her rider Maikel van der Vleuten she was senior champion of the Netherlands at Mierlo in 2014.

his dam sire casago by the legendary casall is a real talking point in Europe being in the mix in nearly every 7yo final there was, he is widely considered the best 7yo in Europe last year and a very exciting prospect for big sport.

we think an awful lot of his dam and put her in foal as a 3yo so that we could have her as a 4yo to produce .