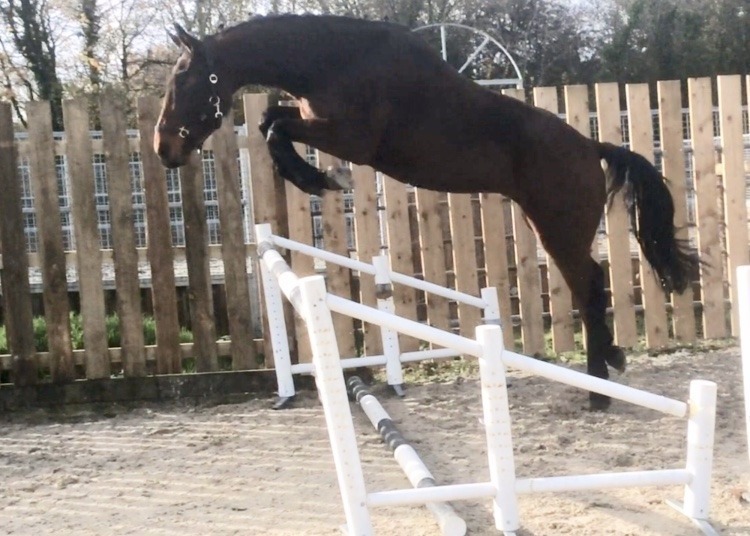 The Grand Prix jumper Dallas has a very strong sire-line. His father Douglas (Darco x Capitol) excites with his offspring who now are jumping at Grand Prix level. Then we find Heartbreaker, Mr. Blue and Nimmerdor, who have more than proven themselves in sport and breeding. The thoroughbred Erdball xx gives blood and hardness, but was also sire of many Grand Prix jumpers.

Dallas is a modern stallion with good gaits, jumps with very good take off, much scope and is very careful. Dallas underwent his stallion test in Adelheidsdorf, Germany, to pass the 70 days test. He received good marks for his jumping - averaging 8.53, to place 2nd in the Jumper Stallions ranking. His free jump score was a 9, jumping under saddle an 8.5 and for potential as a jumping horse a 9.08, giving him the highest score of the group for this section.

Dallas already showed a lot of potential under the saddle as a young horse. As a 6-year old he was unbeatable in the stallion competition class Z / ZZ and scored three consecutive victories in Ermelo, Roosendaal and Zuidbroek. The successes are now being continued at a higher level. Dallas won the Puissance of Osloand the Puissance at Falsterbo. At big international shows he placed high several times.

his dam line is exceptional, his dam is “keur” graded and sibling to “Sacramento “ (no limit ) who jumped to 160cm level .

his dam has some very good progeny who would be well known within the uk, siblings to this guy include:

”garande “ (querly elvis)Jumps to 150cm level in the uk including on young rider nations cup winning teams with james winter.

these two siblings look exceptional horses for the future....

this guy moves with quality and shows a great technique, scope and care while loose jumping and has a great temperament.

ready to start in readiness for next years young horse classes and beyond.