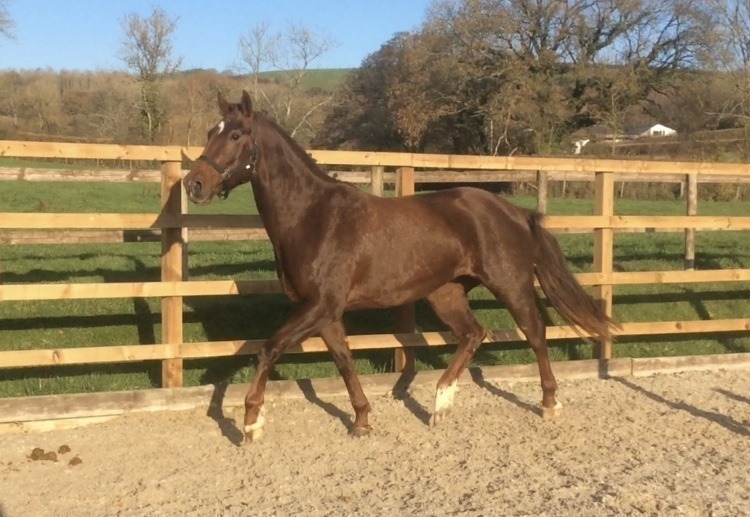 a super modern type this , she has loads of quality , she moves well and is top class loose.

a great temperament too!

Douglas underwent his stallion test in Adelheidsdorf as a 3 year old, earning the 1st place in jumping with 139.49. Scores for the jumping portion were 10, 9.3, 9.3 and 9

As a 4-year old Douglas was the Champion of Ireland in his age group. At 5, 6 and 7 years old he was a finalist at the Irish Championships. When he was six, he was Irish Reserve Champion.

Douglas has several approved sons: Dallas VDL, D’Inzeo and Camillo VDL. As a five year old Camillo VDL became Irish Champion of his age and won the championship for five years olds in Dublin and was a finalist at the World Championship for six years old horses in Lanaken.

Daughter Dolivia was Champion of the Open Friesian Championship for Free Jumping - 4-year old division and in 2011 she earned 85 points for her IBOP test.

At the National Free Jumping Championship 2010, the Douglas daughter Cirnanda, became the Dutch Champion. Daughter Classica VDL was 2nd in the Iron Springs Farm Cup for 5-year old jumpers at the KWPN-NA Inspections in the USA.

Thanks to the outstanding performances of his offspring Douglas received the predicate ‘Prestatie-Fok’ of the NRPS studbook.

this mares damline is super too,

she has some very exciting siblings,

this mare is ready to break and will be a super prospect for next years young horse classes and beyond .