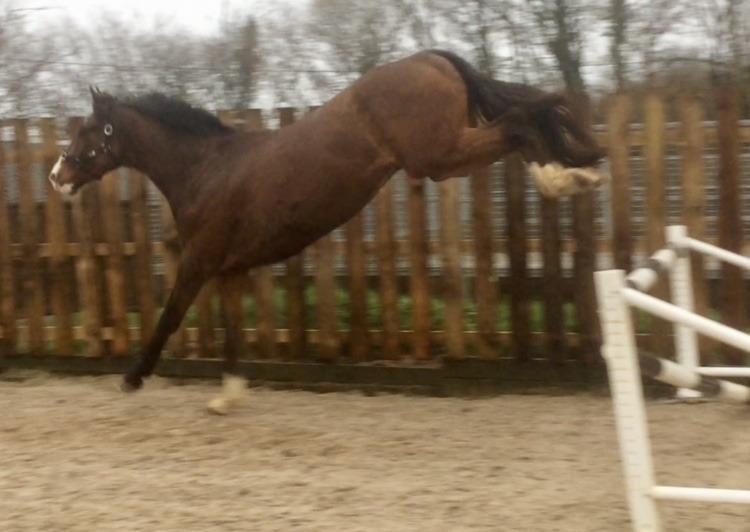 His sire George is proof that coincidence does not exist! He unites the proven genes of Vittorio with the top-performing Amelusiena-line. The big, attractive George jumps with exceptional ability, scope and reflexes and has fantastic riding qualities. At the moment he is competing at 140cm level . He received his KWPN stallion license in May 2015. The stallion committee said : "He has excellent leg technique, a lot of ability and good reflexes.”

His sire Vittorio has an impressive Grand Prix sports career, ridden by Pieter Keunen and Tim van den Oetelaar at 1.50m level. He definitely passes on his sporting ability: just from his first two years that he stood at stud there are already at least 30 offspring who are performing at 1.40m-level or higher.

George’s dam-line is the famous Amelusiena-line. This line has already produced many successful jumping horses. One of the famous progeny of this line is Namelus R, who is a maternal half brother to George's mother R.Amelusiena 6, He gained the Preferent certificate from the KWPN studbook in 2012 for being a more than exceptional breeding stallion. The Canadian Chris Sorensen’s Grand Prix jumping horse Bobby is also an offspring of this famous line. Oliver Lazarus’s Pour le Poussage, a combination participating in the World Championships in Caen, can also certainly be included amongst the exceptional talents out of the Amelusiena-line.

this Guys damline is very good...

“hardy” (Verdi)Jumps to 145cm with bassem mohammed of qatar.

hes a super tempered horse and a real jumper...