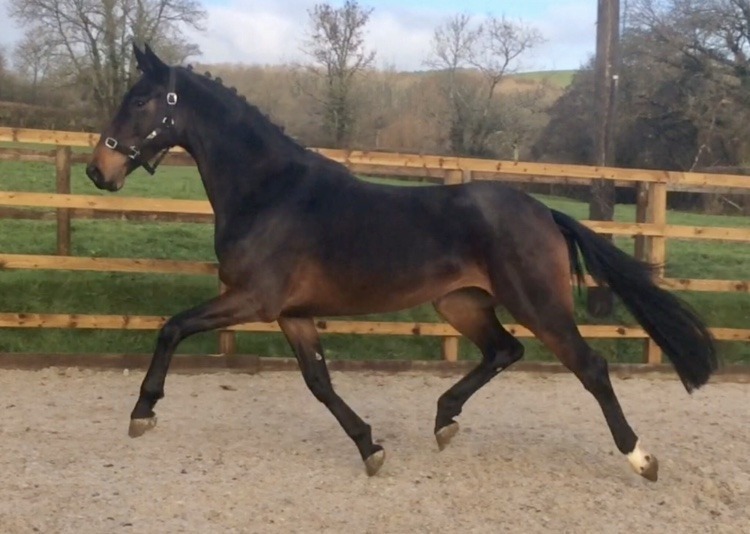 ﻿This is a super sport horse for the future .

she is a super modern type, moves with elasticity and range and shows loads of jump loose.

she is just in the early stages of being broken having come straight from the farm and proving to have a great temperament.

she will have a big future showjumping or eventing .

her pedigree is second to none...

Impressive already lives up to his name as quite an impressive son of the foundation sire Douglas. Impressive has size, power and unlimited scope. Through his sire Douglas the valuable genes of Darco and Capitol I are secured in his pedigree, which only strengthens Impressive’s best features. In breeding, Douglas has developed into one of the most successful sons of Darco over the past years. Offspring such as Dougie Douglas, Guru, Suma’s Zorro, Dassler, and Carneyhaugh Manx perform at international Grand Prix level. Impressive’s grand sire Contender needs no further introduction as one of the most influential sires of Holstein of the past decades. Both Corofino and Lord have been indispensable for the current breeding of show jumpers as well. Impressive’s dam line is filled with successful show jumpers and approved stallions.

Dam, Atendri, ‘provisionally Keur’ and ‘Preferent’ by the KWPN, is also the mother of Easton VDL, who competes with success at 1.45m level in Australia. Atendri is the half-sister of Corrido – an approved stallion by the Holsteiner Verband and an international show jumper with Nisse Lüneburg, of Dirk Ahlmann’s international Grand Prix show jumper Prestigious and of Salina IV – the dam of Jos Lansink’s For Cento, Philipp Schober’s Quinta and the approved stallion Quidman Denfer of Thomas Velin. The KWPN-approved Fernando, who was 4th in the Grand Prix of La Baule with Johnny Pals, the powerful Grand Prix show jumper Cocodrillo and the AES Stallion Show Champion Goodluck VDL are all closely related to Impressive as well.

her now 8yo dam is just starting out jumping herself at 120cm level currently after having 3 foals ....

its easy to see why her dam was used for breeding prior to sport when her siblings include :

”glostro “ (indoctro ) Jumps now to 140cm level as a 8yo under yuri mansur of brazil.

this is a super prospect worthy of anybodies Stable ....