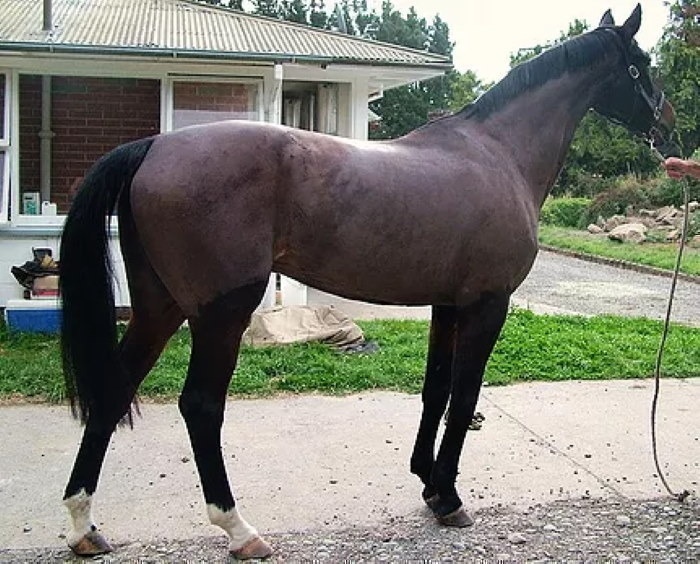 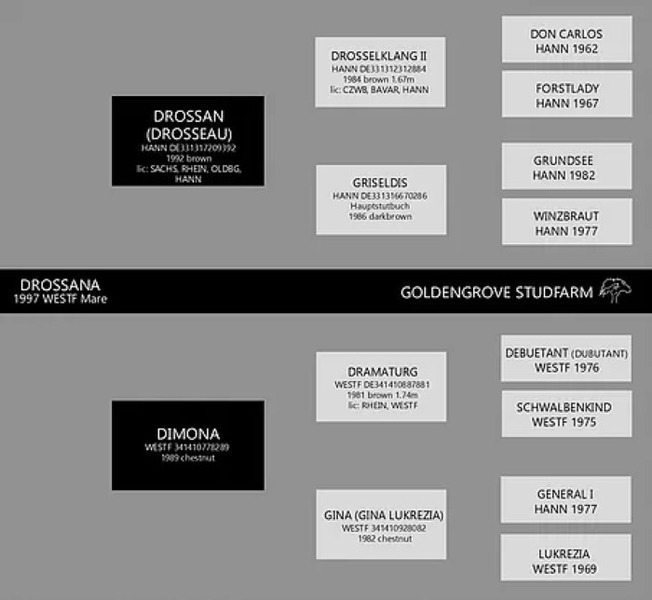 Drossana, by Drossan, is an elegant mare, of superb refinement for a modern sporting athlete. Speed, quickness, athleticism and excellent conformation are attributes of Drossana.

She is an excellent improvement dam. Top riders such as Harley Brown (Drossana x Lasino) and Katie Laurie (Drossana x Lordano) are currently producing young Drossana progeny. Drossan had many 1.45m - 1.60m showjumping sons and daughters, perhaps the most famous in California, was Drossana. He was also the sire of eventors and dressage horses. With 81 approved sons and daughters, across most of the major studbooks, KWPN, Westfalian, Oldenburg, AES and Zangersheide. Dramaturg had a relatively small number of progeny, that said, he was the father of the 1985 Mare Madonna (1.50m SJ) and another daughter Dellonce had a son Domingo (x Diamond Boy) who was a 1.60mSJ, he appears to have been a successful damsire for producing Show Jumpers. Drosselklang II was Hanoverian Stallion of the Year in Germany in 2001. Don Carlos was one of the best known jumping sires in Hannover, with progeny such as Dynamo & Don Juan. The Don Carlos group is remarkable for modern type conformation with very old Hanoverian bloodlines with very little thoroughbred blood. Drosselklang II by Don Carlos – Frustra II lived and served since 2009 at Staj Mustang in the Czech Republic. Drosselklang II (now deceased) was born at 1984 at Margarethe Hagenah in Himmelpforten und grew up at Heinrich von Allwörden in Krautsand. Bought at the Verden stallion-market in 1986 in the I. Celler Lot as the year-companion of the legendary Weltmeyer, he absolved his stallion performance test with the best jumping-result of his class. At Berglage he got his first state stud stallion box. In 1996 his career almost came to a bitter end, when he got seriously hurt while free jumping. Only because of his hardness and intelligence he survived his violation. In 2001 the Hanoverian breeding association selected him as the stallion of the year and in twenty years of breeding at the state stud Celle he produced many sportive successful descendants. With his relocation to the stable Staj Mustang, he became the most important jumping-horse sire of the Czech Republic and was in active use until 2012. He lived until his 30th birthday. The brown stallion listed nearly 900 offspring, among 21 state premium mares and eleven licensed stallions.

We have been flushing and selling top quality embryos for over a decade with excellent results. This allows breeders to introduce new bloodlines to their breeding roster, without trying to purchase a top quality mare themselves. It is also an option for breeders trying to breed a quality sport-horse but may not have a mare suitable. Or for breeders that have the Mare, but she is in competition - in this case you can harvest embryos, inseminate to a stallion of your choosing and use a recipient mare. 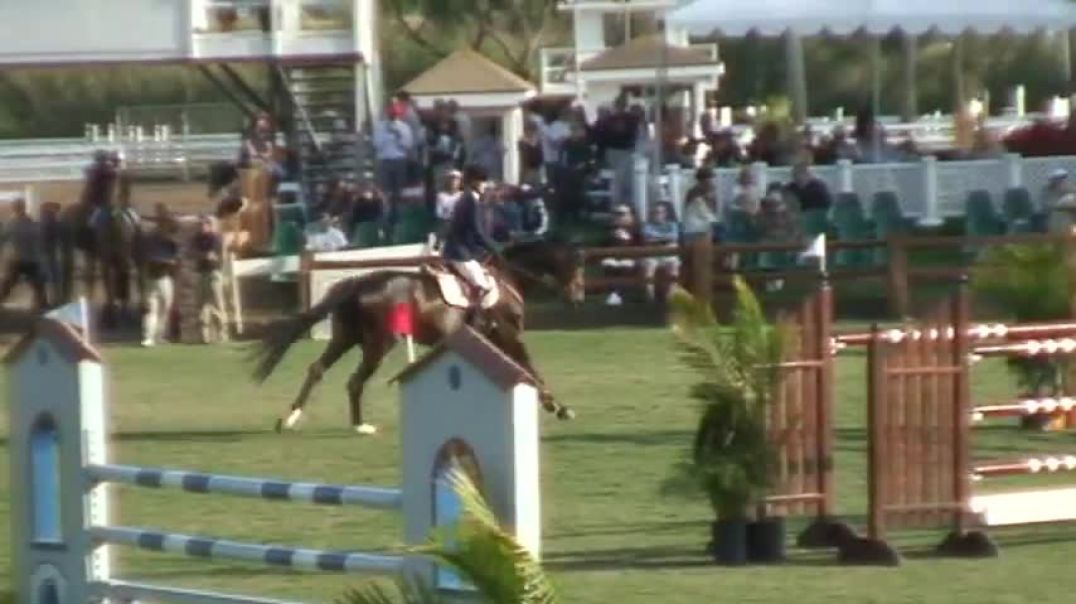